According to a report issued today by Statistics Canada, Saskatchewan’s seasonally adjusted unemployment rate was 4.9 per cent last month, down from 6.0 per cent in March 2018 and 5.8 per cent in February 2019.

The unemployment rate was the second lowest in the country and well below the national average of 5.8 per cent.  March’s unemployment was the lowest recorded in Saskatchewan since August 2015.

Year-over-year employment increased by 9,800 jobs from March 2018.  This marks the eighth consecutive month of strong job gains for the province.  The job gains were primarily full-time employment with full-time jobs up 9,200 from a year ago; part-time jobs were up 800.  Jobs in the private sector were up 11,500 over the same period. 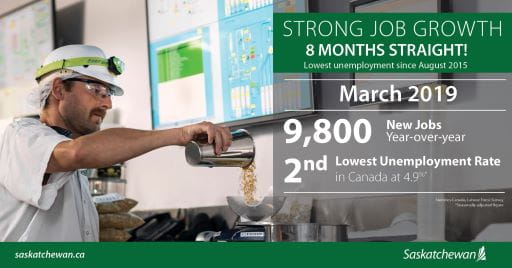 “With nearly 10,000 new jobs created in the last year, Saskatchewan employers are showing confidence in our economy in spite of the external headwinds we are facing,” Immigration and Career Training Minister Jeremy Harrison said.  “We will continue to stand up for Saskatchewan people against federal policies that are destructive to Western Canadian jobs and that will threaten the momentum that our economy continues to show.”

On a seasonally-adjusted basis, there were 3,900 more jobs compared to February 2019, up 0.7 per cent, the third highest percentage gain among provinces.

Other March highlights include: